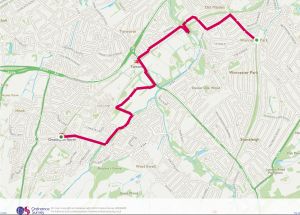 The trail begins at Worcester Park Station and the impressive station mural painted by Lionel Stanhope.

The mural features 24 butterflies, each one representing one of the families who lost their home in a fire at Richmond House September 2019 in the nearby Hamptons development. 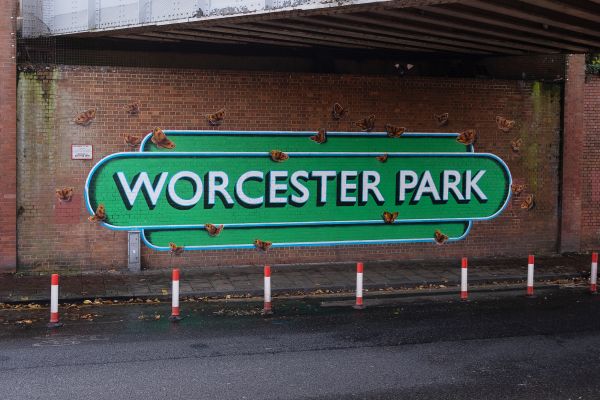 In the early 20th century, the Epsom Sewage Farm occupied a small site immediately south of Green Lane. By the 1960s what was now Worcester Park Sewage Works had expanded southwards to cover about half the area now occupied by The Hamptons and after that it further expanded to the east and west. After its closure in the 1990s it was redeveloped to create the Hamptons in a style reminiscent of New England.[1]

Thames Water, which owned the sewage works, formed a joint venture with Berkeley Homes – St James – which has subsequently become wholly owned by the Berkeley Group.[2]

Walking along Malden Road you pass Malden Green, a site for one of the eight pilot WildWays sites have been introduced on roadside grass verges across the Kingston to create rich, wildflower meadows.

During the first year the grass will be allowed to grow longer, it will then be cut and removed. This will help lower the nutrient level of the soil, resulting in a reduction of grass growth and allowing more space for wildflowers to emerge. As a result, meadow like areas will form and perennial wildflowers will begin to flourish. 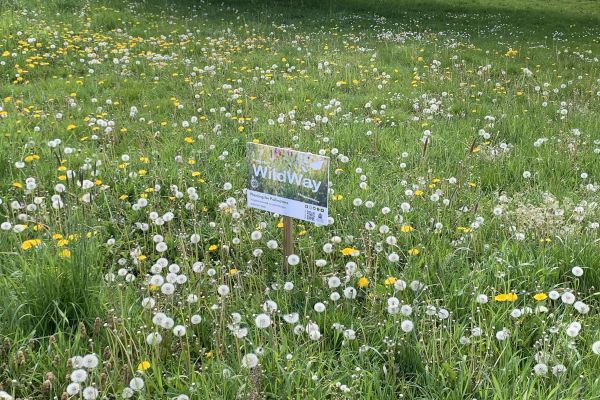 Wildflowers provide a great source of forage for pollinators, including a wealth of butterflies such as holly blues, large whites and orange tips, as well as supporting local bumblebee populations. This new management method will also improve the soil's health and introduce much needed colour to our highways.[3]

Taking a left at Plough Green, once the site of a Harvester for many years before becoming a Millar and Carter Steakhouse you stroll down the leafy Church road before turning turning right onto Manor Drive North. 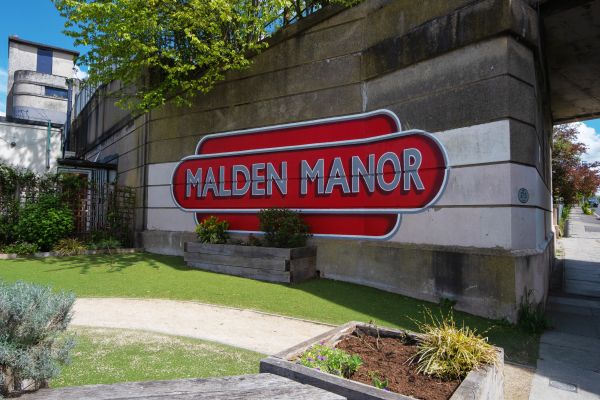 The Malden Manor Community Project is a study into quality of life for the residents in Sheephouse Way estates and Malden Manor conducted by Royal Borough Of Kingston and Kingston University. Emerging from the project report came 29 recommendations including improving the environment around Malden Manor Station and working with partners to alleviate social isolation. The station, only partially manned, is a focus for fly tipping. Users report feeling vulnerable while waiting for a train, so much so that they avoid using the station altogether.

The community garden project forms part of South West Trains' Adopt-A-Station scheme: community members are encouraged to form a group to take ownership of the station, feed-back problems and influence its use. Activities arising  such as maintaining the garden, aim to address social isolation, which also featured strongly in the Malden Manor Community Project Report findings.

This garden is being match-funded by South West Trains and Quadron, who look after the green spaces in the Royal Borough of Kingston.

Planters added in January 2020 and The Lionel Stanhope Mural was competed in March 2021.

Taking a left onto Sheephouse Way the road takes you into towards the Hogsmill River and Knollmead Park.

Take a left before Knollmead park to stop off under the railway ridge to appreciate the Malden Manor Mosaic.

Crowdfunded project by Save the World club  (SWC).

The plan was to transform a graffitied archway in Malden Manor by installing a vibrant mosaic mural designed & created by the local community. This created safe access to an area of the beautiful Six Acre Meadow, which is a underused oasis hidden behind an urban estate. People hardly know this space exists, and they don't know of its historical importance as the site where the famous painting Ophelia by artist Millais was painted. 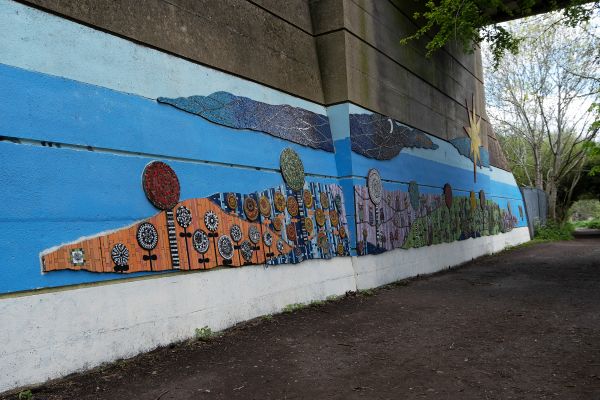 The dazzlingly 15 meter mosaic was officially opened by Thay Thayalan Mayor for Kingston in March 2019.

The mosaic was made exclusively from recycled materials donated by businesses, shops and residents, and SWC secretary Dr Tariq Shabbeer.

People from across the Malden Manor community contributed to the mosaic, from schoolchildren to inter-faith groups.

Ms Porrelli said: “It has been an incredibly positive experience for me.

“I’ve had lots of little kids coming down saying, ‘Oh my god that’s the bit I did in school!’ and just being really proud of it.”

Ms Porrelli invited all volunteers to contribute their own ideas for the mosaic, then pieced them together to create a spectacular woodland scene with foxes, owls, butterflies, a fierce sun and a shimmering moon.[4] 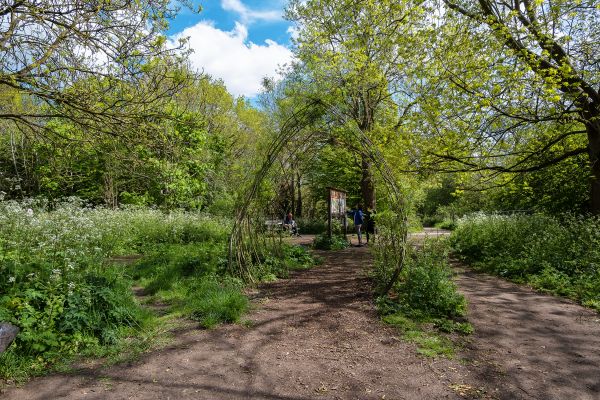 This trail doubles back into suburbia along Knollmead and Donald Wood Gardens before arriving at Kingston road and Tolworth Station. 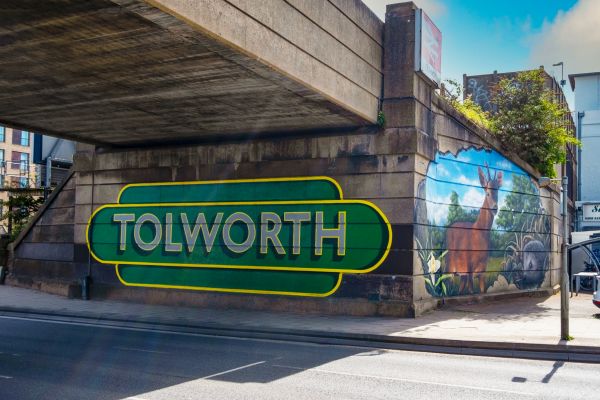 At Tolworth Station you are treated to two murals supported by Network Rail.

Following the cycle lane and path past Lidl’s new UK HQ you can slide off the busy A road into Tolworth Court Farm Fields.

Tolworth Court Farm could be one of London’s greatest nature reserves. At over 50ha, it’s size & location along the Hogsmill River mean it is an important place for nature.

Bug hotel, benches and other way finding elements and made from reclaimed timber from Tolworth Broadway created by 121 Collective. 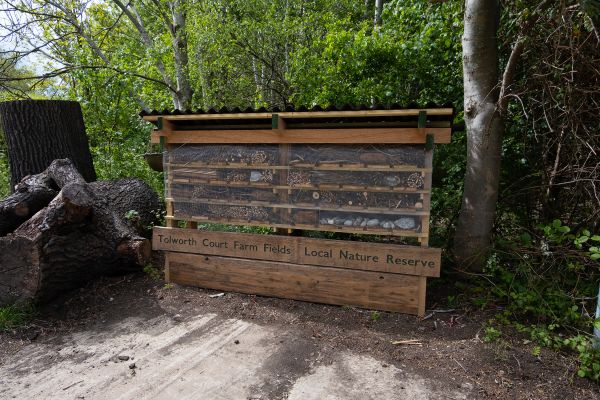 Passing across the Tolworth Court Farm and taking a choice of two or three footpaths that lead to Moor Lane you are only a short walk from Lionel Stanhope’s Chessington North Station Mural. 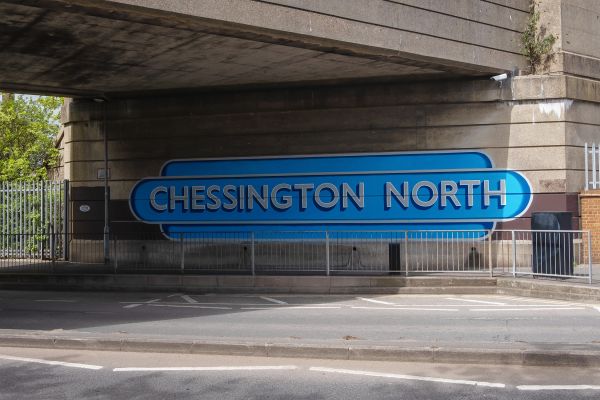 You have the option to end your walk here or double back towards the Hogsmill River.

The walk then rejoins the London Loop and Hogsmill Nature trail for a glorious jaunt toward Ewell West Station.

If there’s fuel left in your furnace then following section 7 of the London Loop backwards towards Banstead is a short but sweet 3.5 mile stroll.

If you’re hanging up your walking shoes for the day then Ewell West has trains direct to Waterloo or Guildford.

Retrieved from "https://londonnationalparkcity.wiki/index.php?title=Worcester_Park_to_Chessingston_Art_and_Nature_Trail&oldid=2574"
Categories:
This page was last edited on 12 May 2021, at 17:12.
Privacy policy
About London National Park City Wiki
Disclaimers