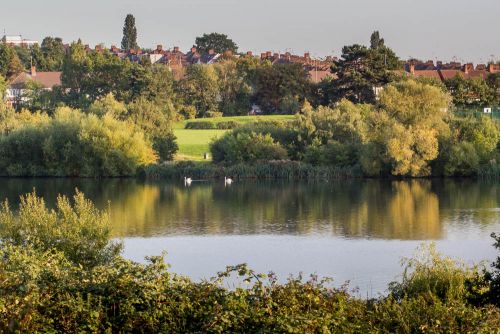 The Welsh Harp, also known as Brent Reservoir, is a large body of water that straddles the boundary of the boroughs of Barnet and Brent in north west London. It is surrounded by the north circular and the Edgware road and an increasing number of high rise buildings including the nearby Wembley stadium, giving it a distinctly urban feel. It is a short walk from West Hendon station on the Thameslink, or a bus ride from nearby Hendon Central on the Northern line. It has been a popular spot with birdwatchers and walkers for many years, and is a designated SSSI (Site of Special Scientific Interest) - the only one in either borough.

A reservoir steeped in history 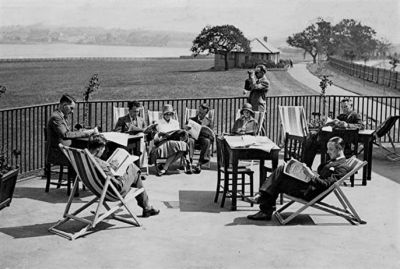 The reading terrace of Neasden library in 1931, built to overlook the reservoir

Originally named the Kingsbury Reservoir, and then Brent Reservoir, the Welsh Harp is colloquially named after a public house called which stood nearby until the 1970's. The Welsh Harp Reservoir has seen its fair share of both social and natural history. Constructed between 1834 and 1835 (with an extension being added in 1837), it was originally built to supply water to the Paddington arm of the Grand Union Canal. When it was expanded again in the 1850's it meant that at its largest, the reservoir covered most of the area that is now home to Brent Cross Shopping Centre (Welsh Harp Conservation Group).

In the Victorian times, the Welsh Harp was a popular leisure destination which offered boating, swimming, pleasure gardens, fishing and even ice skating when it froze over. There is even a story about a French balloonist (Louis Capazza) who, in the early 1890's, attempted to demonstrate ballooning at the reservoir with varying results.

The reservoir's strange and intriguing history doesn't end there. During the first world war the nearby areas of Hendon, Cricklewood and Kingsbury became central to the war effort and the Welsh Harp played its own part. The new state of the art weapon at the time, the tank, was tested on the fields surrounding the reservoir and in 1917 a Handley Page seaplane, built in Cricklewood, took its test flights on the reservoir.

The Welsh Harp has been a popular destination for nature lovers, particularly birdwatchers, for decades. It has seen its fair share of rarities over the years and it is considered to be an important site for passage migrants and winter visitors. Unusual species recorded at the reservoir include Snow Bunting, Hooded Crow, Dartford Warbler and Cuckoo. If you visit do listen out for the distinct call of the Cetti's warbler, which was once a rare winter visitor and is now considered to be a resident, having bred at the reservoir for the first time in 2017 (Welsh Harp Conservation Group Bird Listing)

A survey of mammals in the area was carried out in 1995 and has since been added to by regular naturalists at the site. Recorded mammals have included bank voles, water shrews, weasels and muntjac deer and several species of bats including the Soprano pipistrelle, Leislers' bat (once unknown to the reservoir) and Serotine (recorded for the first time on a bat walk in 2007). Other vertebrate species recorded include slow worms, grass snakes and smooth newts.

There have been many invertebrate species recorded at the Welsh Harp over the years. Species of butterfly known to be breeding on the site include the Orange tip, Brimstone (probably breeding), Speckled wood and Painted lady. Moth species that have been trapped and released during moth surveys have included the beautiful Hummingbird hawk moth (one record from 2012) and the Elephant hawk moth (thought to be relatively common in the area). There have also been 15 species of dragonfly/damselfly recorded, and several species of bees including the recently recorded Clark's mining bee, which was observed visiting a nest in bare soil in 2016.

The area is also a vital habitat for fungi, which has also been surveyed and listed on the Welsh Harp Conservation Group website. Species of fungi recorded at the Welsh Harp include Fly agaric, Common puffball, Jelly ear and the wonderfully-named Dryad's saddle, which was recorded on an Elm tree. Fungi is vital for biodiversity, so if you do visit the site, be sure to safely observe and help protect these organisms, particularly in the autumn when they thrive.

Retrieved from "https://londonnationalparkcity.wiki/index.php?title=Welsh_Harp_Reservoir&oldid=2579"
Categories:
This page was last edited on 20 May 2021, at 15:29.
Privacy policy
About London National Park City Wiki
Disclaimers