10 Things to Enjoy in Tooting

Tooting Commons is in the London Borough of Wandsworth and is divided into two commons, Tooting Bec Common and Tooting Graveney Common. The larger of the two commons is known as Tooting Bec Common spread over 152 acres of green space, which on a compass veers towards the northern and eastern side, going towards Streatham.

The other common, Tooting Graveney Common is only 66 acres of green space veering towards the southern and western sides, frequented by joggers, pet owners, cyclists and visitors taking leisurely walks on the concrete paths that lead to a cafe, tennis courts and a vaste expanse of land for sports activities and for park users to take in the natural scenic beauty surroundings.

The entrance signage on the commons clearly state that it is the owners' responsibility to keep their dogs under control and to clear up their dogs' mess as well as ensuring they do not harm or disturb wildlife. Cyclists are reminded to cycle only on marked cycle routes and park users are expected to show courtesy to other park users.

For a historical account of the two commons, you can visit the Tooting Common Heritage Project - The History website: 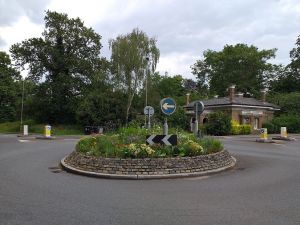 Furzedown recreation park and centre offer recreational and sports facilities with an outdoor hard court sports pitch for netball, tennis, 5-a-side football, cricket nets, a 60 metre running track and a 4 lane 60 metre athletics track (at the Furzedown recreation centre, on the opposite side of the park).

Throughout the year, the recreation park is used as part of local festival participation such as the Wandsworth Arts Fringe (www.wandsworthfringe.com) with fun activities, theatrical, dancing and singing acts for all the family to enjoy and take part in.

There is also the outdoor table tennis table, park benches and a children's playground and greenery for parents, carers and child minders to take young children for a morning or afternoon stroll and to meet other young parents or child minders, even for a picnic and as a way of socialising and get to know the area better. 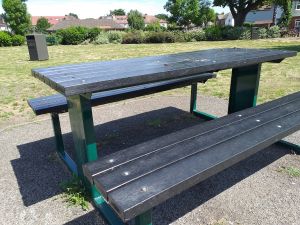 Outdoor seating at Furzedown Recreation Centre for picnics, family outings and during local festivals in the park.

For more information on the facilities the recreation centre provide, you can visit www.enablelc.org/frc

The Flower Stall by Tooting Broadway tube station is a long established florist known for its bright and beautifully arranged bouquets, house plants and outdoor plants. It has almost become synonymous with the tube station, having been part of its history for over 4 decades and seen many traffic incidences including the high street flooding a few years ago when a section of the road was cordoned off for most of the day, causing commuter 'commotion'.

The florist's enthusiasm welcomes back loyal customers to his 'alcove' of delightful flowers, arranged neatly in layers and under a canopy which converts to a wagon that has stood the test of time. The owner and the florist can double up as local guides with a wealth of information about the area and being so noticeable, and situated outside the tube station, they must have directed visitors to the area many times over. 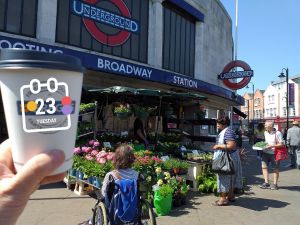 The busy high street is served by traffic lights that regulate the traffic coming from Wimbledon, in one direction, Garratt Lane, in another direction, and Tooting High Street going towards Balham, in South West London, which is part of the London Borough of Wandsworth.

As Tooting is increasingly visited by visitors from other boroughs in London, the UK and the world, for its authentic cuisine from different cultures, ranging from Asian to Mediterranean, Edward VII's statue is the first monumental attraction that 'greets' visitors and residents alike.

For a detailed description of the statue and its plinth you can visit the website: 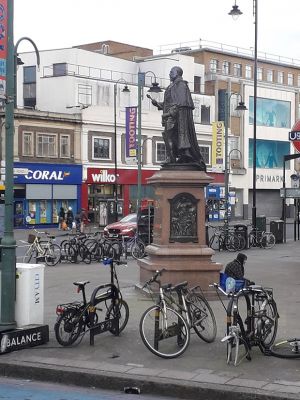 Musicians Busking on the Tooting Piazza

Tooting High Street in South West London is in the London Borough of Wandsworth.

Tooting is renown for its multicultural and diverse cuisine and culture, from East to South and South East Asia, with an influx of Mediterranean influences that has given the area a unique melange of cuisine, culture and lifestyle.

The area is usually bustling with commuters, residents and visitors, during the working week with shoppers and residents crowding the high street from mid-morning onwards, but Tooting Piazza, by Tooting Broadway tube station comes to life at the weekend, with a myriad of organisations publicising their services or surveys.

Busking has also become part of the high street's attractions to its cafes, eateries and restaurants, especially Tooting Market, which has won awards for its food hall of local and independent stall holders. 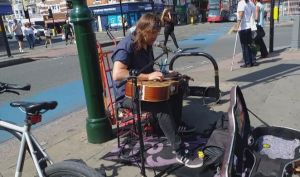 A garden, formerly well maintained in the 1970s and 1980s and considered a landscape garden, visited on special occasions by Her Majesty, Queen Elizabeth II's Mother and one of the most-frequented gardens in Tooting, (part of the London Borough of Wandsworth), for its display of carefully selected flower bed arrangements and trimmed down trees, shown in the photograph (to the right).

A public bench neatly rounds off this oblong-shaped and once-renown gardens of Tooting, which brought many visitors to the area for a glimpse of the once-spectacular array of seasonal flowers arranged meticulously in line with the shape of the garden.

Throughout the years, this garden saw a few transformations after the landscape gardener retired, and it became a garden with cropped trees and a green patch of land, yet it still maintains its mark as being part of Tooting's history and with new development plans, this garden should still stand in all its former splendour. 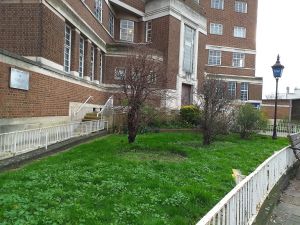 Front Garden by the former Tooting Police Station, once visited by Her Majesty, Queen Elizabeth's Mother and attracted visitors to its site in the 1970s and 1980s.

Tooting Market, an award winning South West London indoor market, has become the centre of Tooting for its art wall, authentic cuisine food court and exquisite produce and items, Driven by the constantly changing weather, this is often a place to sit, take in the ambience and observe local residents return to vendors for their weekly shopping.

A commissioned artwork takes pride-of-place on the art wall which is also part of the food court seating area and with a tropical themed juice bar in the centre, to add to the natural and vibrant surroundings. 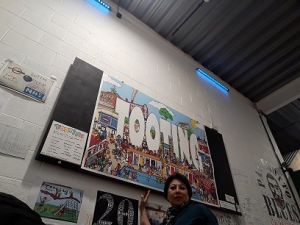 Tooting Market's Art Wall, Food Court and Varied Stalls, have made this award-winning indoor market a place to visit.

Since opening its doors to the public in the summer of 1906, the Lido has become a frequented sports club by sports and keep-fit enthusiasts as well as the South London Swimming Club (SLSC), whose members have special access during the winter months.

The Tooting Bec Lido | Tooting – Places Leisure website (www.placeleisure.org/centres/tooting-bec-lido) provides further information on how to gain membership; keep up-to-date with its health and wellness blog and shows the club's opening times for the Lido, on its home page. 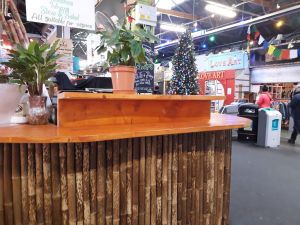 Juice bar that adds a tropical theme to the Art Wall and Food Court, Tooting Market

Many loyal supporters of the Tooting Bec Lido have followed the club's early beginnings to its current makeover, with the addition of a Pavilion in 2017, providing sports facilities to encourage existing members and new members alike, to use the sports hall as well as the widely-known swimming pool, opened to the public in the summer months.

Tooting Bec Common Lake is purposely-built to promote the ecological aspect of wildlife habitat around the Common, attracting wild water fowls such as ducks, swans and geese to its waters. Other types of species include fish, such as carp, bream and pike and invertebrates such as dragonflies. 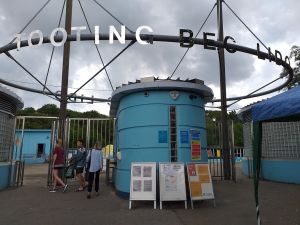 Park users sometimes come along with children, holding bags of breadcrumbs to feed the water fowls. As signs are not visible to indicate feeding wild water fowls is not permissible, some park users may continue to come to the lake to feed them.

The peaceful quality of the lake and the scenic beauty of the tall forest of trees in close proximity to each other, offers a secluded area of the Common where park users can sit in silence for a few hours, taking in the wildlife activities on the lake itself and whiling away the time reading, or just in deep reflection. 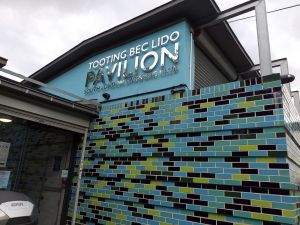 Tooting Bec Common Cafe, is found at the halfway point of the joggers' and walkers' route divided on one side by Dr Johnson Avenue, which is a main road, and on the other side by another main road, Bedford Hill.

A very busy cafe with park users sitting in the outdoor seating area, is a welcoming sight after a 30-minute brisk walk around the Common. The hot beverage, some cake and the warm, country-decor interior, in the wintry months especially, can only make the morning jog that much easier.

The cafe is a park hub for families and friends to sit, have a hot or a cold and refreshing drink, and enjoy the natural surroundings of trees, green space and a lake with wildlife habitat near by.

For more information about the Common, the website to visit is enablelc.org 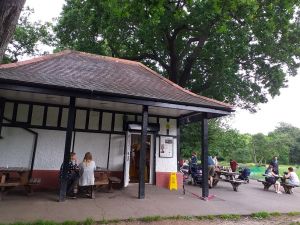 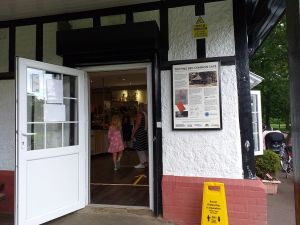