The concept of the Thornton Heath Art Trail was created thanks to a collaboration between Thornton Heath Community Action Team, Free Art and Croydon Adult Learning and Training

In 2016 The Friends of Grangewood Park organised a weekend to create a mural for the park hut and Friends lock up. The project was funded by the Mayor of London's Capital Clean Up and Croydon Council's Community Ward budget. The design was created with the help of local park goers and features trees and wildlife including the park's famous white squirrel Walter. 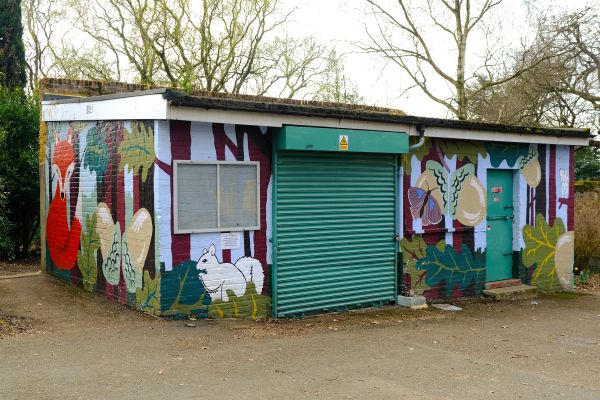 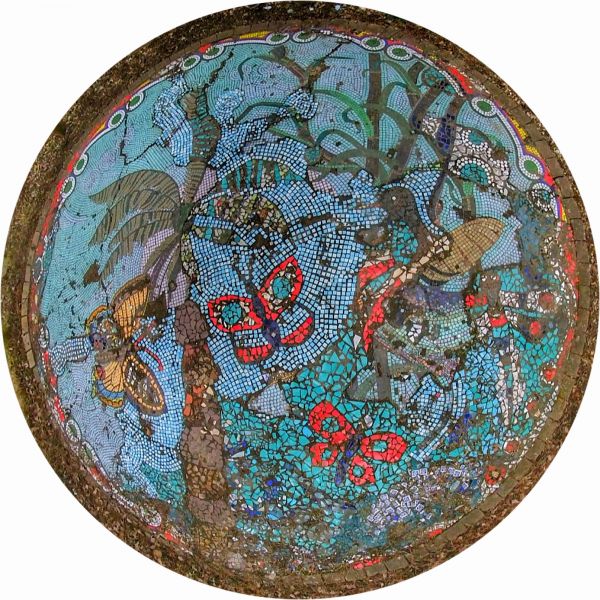 Above No.9 High Street

'A Thornton Heath Nature Trail' created by Mat Pringle is inspired by the flora and fauna of Thornton Heath; from the Albino squirrels of Grangewood Park to Kayla the eagle. Following a printmaking workshop with the local community, the artist developed a series of linocut prints which were enlarged and painted onto the final panels for the mural. The painted leaves of the mural act as a simplified map of Thornton Heath and the locations of the plants and animals. Curated by You&Me Architects and commissioned by Croydon Council in 2017. 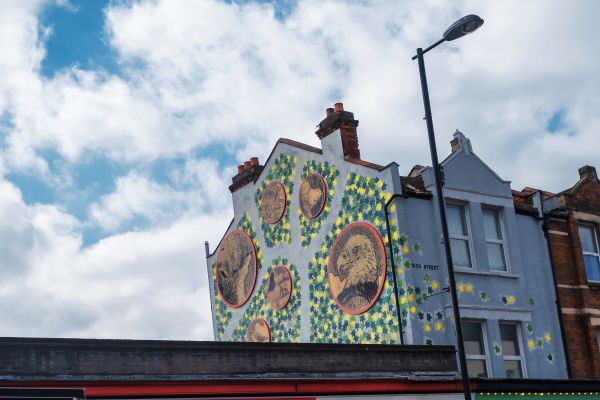 Illustrator Philip Dennis created 'Home Forms' after conducting a series of workshops where he used ‘observational drawing’ as the main technique. The artist then transformed drawings into bold, graphic forms and patterns, which used as direct inspiration for the design of the public artwork. The artwork’s outline echoes the plaster frontage of Electric Palace cinema. Curated by You&Me Architects and commissioned by Croydon Council in 2017. 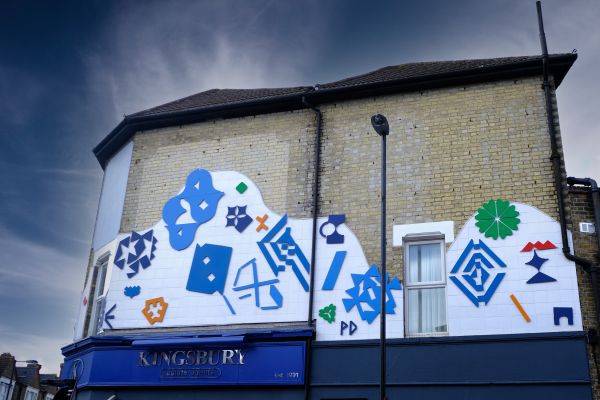 At the Junction of Gillett Road and the High Street

YOU&ME architects curated a series of High Street mural artworks in 2017, working alongside local artists in Thornton Heath, as part of the High Street Shop Improvements and Public Realm project. YOU&ME contributed their own artwork mural next to Floor Fashion furniture shop, incorporating the area's history and depicting a representative view of the former A.F. Bundle furniture shop. 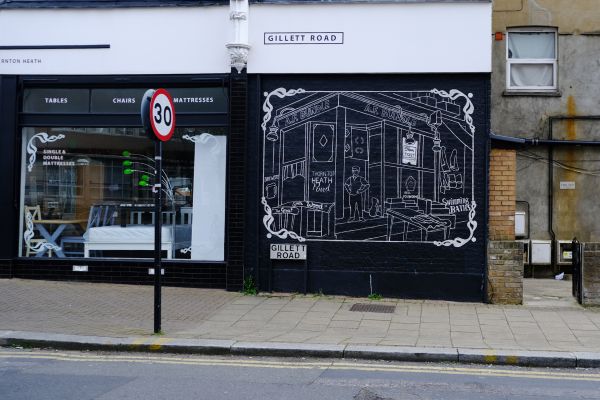 Side Wall of No. 80 High Street

Co-comissioned by Croydon Council and You&Me Architects in 2017 to design and paint a mural for Thornton Heath, Ben Connors was interested in the idea of creating an alternative map of Thornton Heath and its stories. The mural is based on sound, character, people, words, vibe, pattern, and drawing on the idea of Thornton Heath as a ‘living organism’. His mural  'Potential, Together' represents some of the young people’s perspectives on their area. 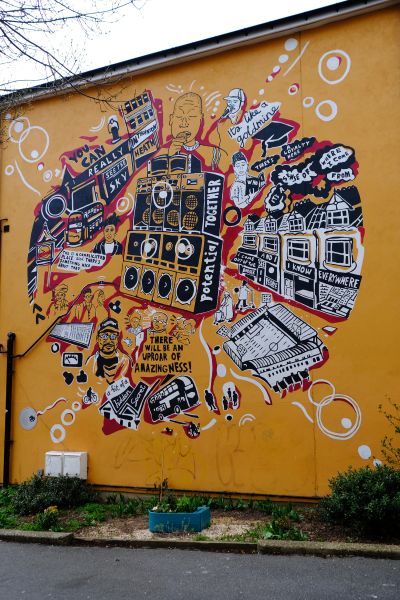 "Dare to Dream is a saying that is very close to my heart. It's stuck with me throughout my childhood and adult life here in Thornton Heath. The piece serves as a visual reminder that no matter your age, ethnicity or religion, you should never stop dreaming of things you want to achieve and accomplish in life. Dreams + actions = a dream come true." 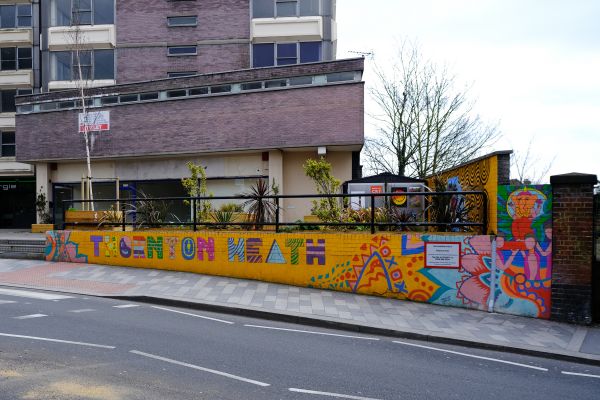 Network Rail has been working with sign writer Lionel Stanhope, renowned for his vintage typography work, to paint murals on the railway across London.

Local resident Averil Coutinho, a member of the Thornton Heath Community Action Team, has championed the cause of getting one of the murals and designer Vân Dang came up with this design. 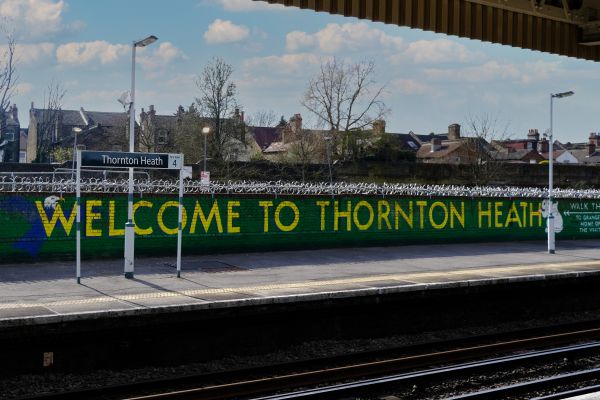 The aim of the lamp post banner competition was to celebrate the unique spirit of Thornton Heath with artworks celebrating the wonderful community and culture in the area.

Banners include work from local artists Pins and Samantha Warren.

Two of the banners chosen were from Free Art. The artworks included hand drawn sketches and crafty creations from residents of the refugee hostel on Brigstock Road. 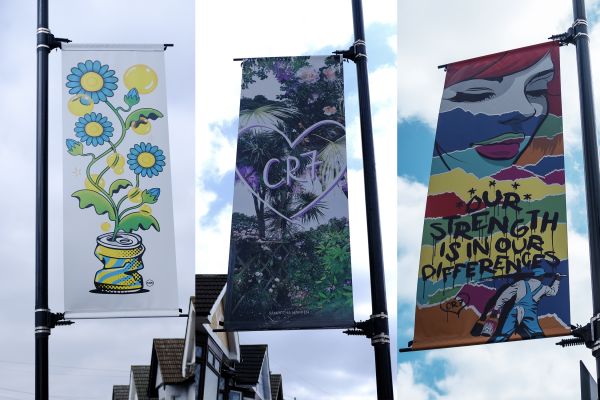 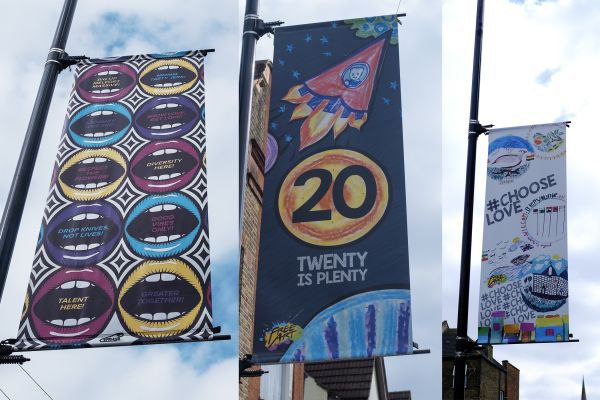 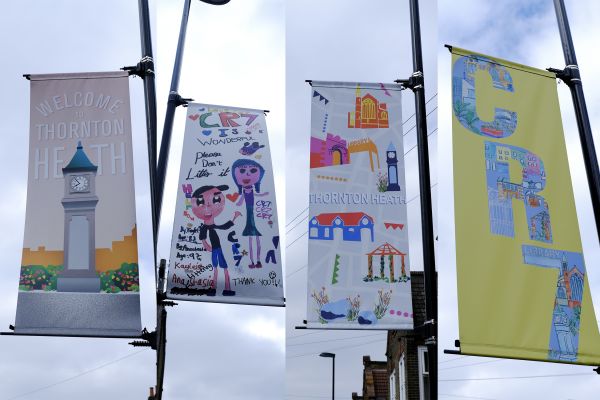 Side wall of No.1 Melfort Road

Ben Slow's striking work can be found at the corner of Brigstock Road and Melford Road on the Refugee Centre in Thornton Heath.

Street artist Ben is well known for conceiving striking black and white street portraits all around the world and is renowned for his large-scale murals.

The portrait is of a local boy named Mika who was five when the mural was painted. 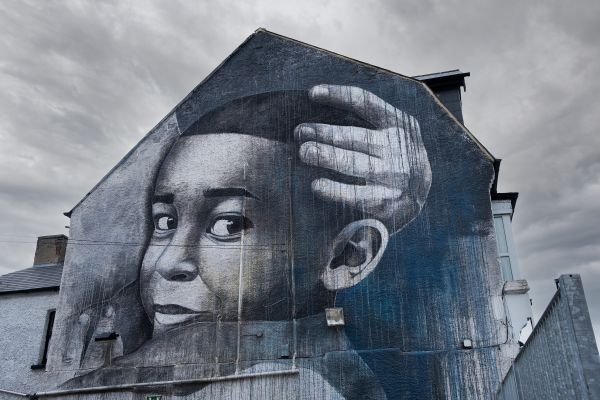 The side flank wall is by London artist Mark McClure and builds on the idea of a graphic landscape.

"My tallest piece to date - and an honour to bring some colour and creativity to such an important & under appreciated place, especially given the current post-Brexit climate." The front and back are by artist Curtis Hylton in his signature style which incorporates tropical and native botanicals and birdlife. 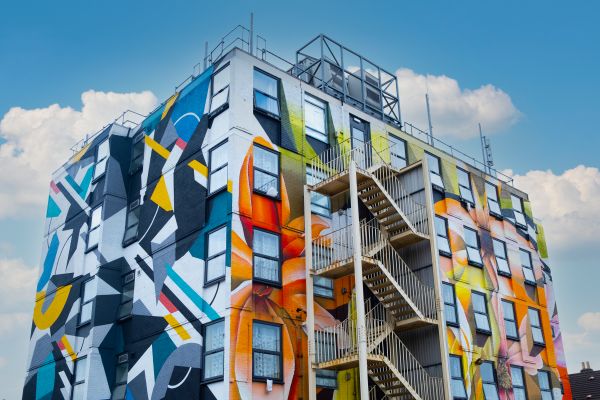 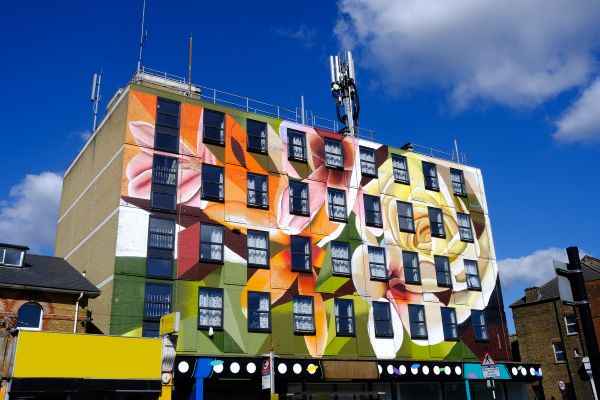 About 30 people, including residents living in the area came together to paint the brightly-coloured peacock mural on the wall of the Shree Sakthy Ghanapathy Hindu Temple in October 2018. 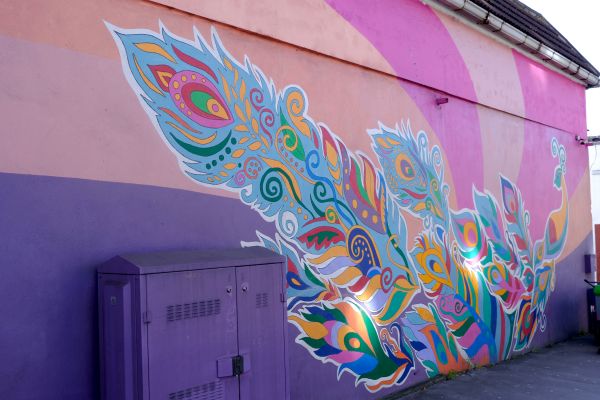 Brook Road, was nominated as one of 10 streets in Thornton Heath, requiring improvements as part of year one of the Street Action Project because of the level of antisocial behaviour, noise disturbance and litter endemic to parts of the street.

Funded by the People’s Health Trust the project is run by a team of volunteer residents, from Thornton Heath, and is an off-shoot of THCAT (Thornton Heath Community Action Team).

These residents requirement was to create a work of art with  images representative of Brook Road  and  the surrounding neighbourhood; including ensuring images of the diverse community of residents who support and care for and about each other. The completed mosaic was achieved over three days by residents who contributed old crockery, unused tiles, and a broken glass door used in the design. 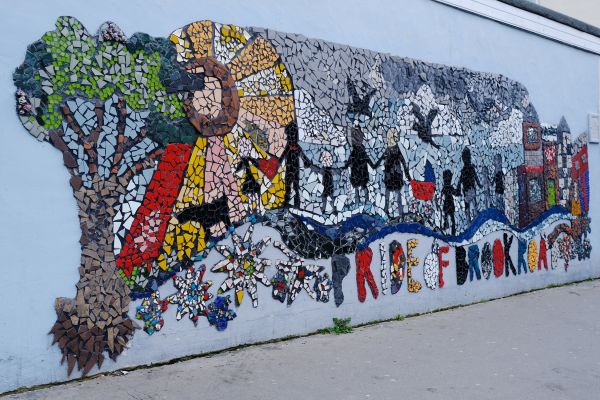 Quadrant Road is another one of the streets involved in THCAT’s Street Action project. Residents decided to put a mural on the ten metre long by 50 cm high wall  in the hope of deterring people from dumping rubbish and making it an eyesore. Local resident Simon Carter designed the mural, and local artist Vân Dang helped bring it to life.

The mural features the nearby Norbury Brook river meandering the length of the wall, and around it words which residents feel describes their road:  Tolerance, Proud, Community, Neighbourhood, Diversity, Home, Multicultural and Accepting.

The once vandalised railway footbridge has been transformed by underwater themed designs by local volunteers.

Thornton Heath Community Action team led by Vân Dang worked through a bank holiday in 2019 to transform the bridge. 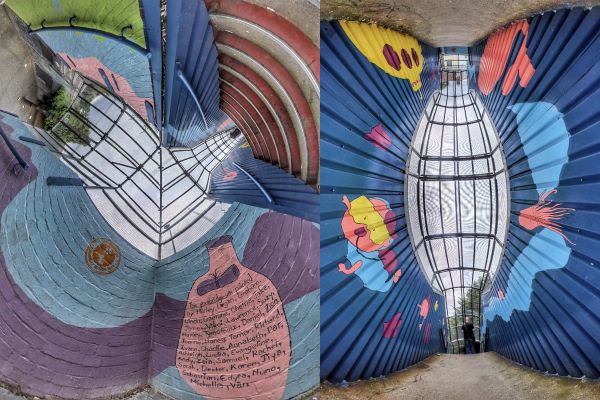 Another THCAT’s Street Action project, the mosaic is of a summer cottage garden. Artist Grace Holliday produced the draft design. Local residents were asked which plants and creatures to include and many donated crockery and tiles for the piece. 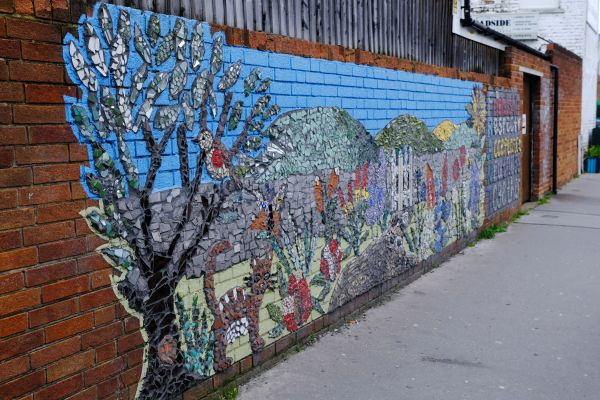 Created by Maud Milton with the help of the local community during the 1st national lockdown and completed in the searing August 2020 heatwave by Milton and award winning tiler Sharon Taylor.

The project was initiated by local community liaison Averil and supported by Southern Rail (hence the colour scheme).

The roundel is located on platform 1 of Thornton Heath Station and I urge you to take a close look as the details of each title.

Along words that represent Thornton Heath some of the tile pressing have personal connection to the creator.

Local print and textile artist Samatha Warren pressed a tile using her grandmother’s buttons she inherited with her sewing box.

The roundel also exists as 2020 time capsule with the “Support NHS” living top and centre and “Lockdown walks” boarding the main text. The Grangewood Park white squirrels even get a nod of recognition, forever immortalising them in local folklore. 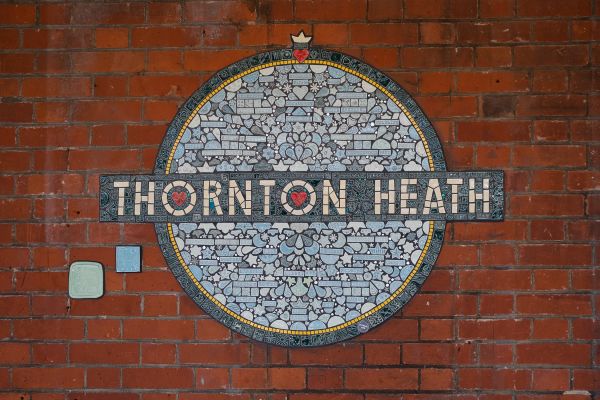 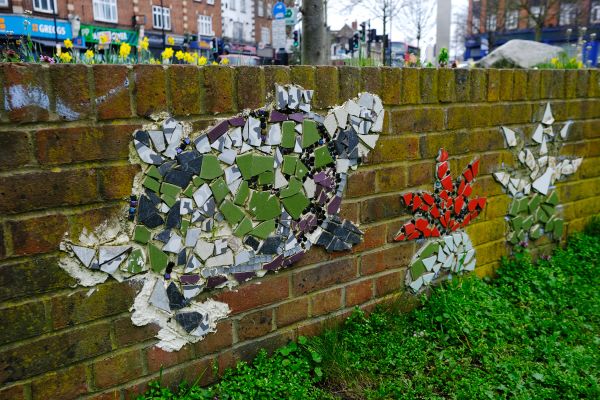