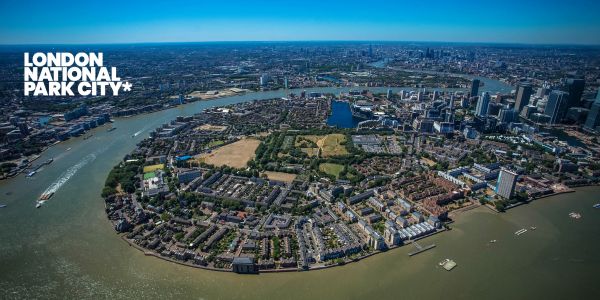 The River Thames from the air by National Park City Foundation.

Interesting facts about The River Thames

The River Thames is 215 miles long. The source is at Trewsbury Mead in Gloucestershire and it ends near Southend-on-Sea. It is the longest river in England but is beaten to the UK accolade by The River Severn.

The widest part of the river is 18 miles across (at the mouth of the river), while its narrowest point in Lechlade is just 18 metres.

There are 200 bridges, 27 tunnels, six public ferries, one cable car link, and one ford along the River.

70% of London’s water is supplied by reservoirs, which collect their water from the River Thames and Lee. The remainder comes from groundwater that lies underneath London.

Swimming in the Thames

Bathing in the Thames used to be the norm in the Victorian era and now with the river being its cleanest in living memory, there has been a real resurgence in ‘wild swimming’. Long before David Walliams’ 140 mile swim in 2011 many famous figures have shared their thames swimming experience. These include The 18th-century satirist Jonathan Swift, United States founding father Benjamin Franklin and in the summer of 1807, 19-year-old Lord Byron boasted about his 3 mile swim from Lambeth through the 2 Bridges Westminster & Blackfriars.

Mercedes Gleitze, the first British woman to swim the Channel, trained for her swim in the Thames. On 18 July 1927 she left Westminster Bridge to swim a staggering 120 miles, down the Thames and around Beachy Head to Folkestone.

The famous Oxford v Cambridge boat race has been running since 1829 with the first Women's Boat Race being introduced in 1927.

The Oxford and Cambridge Boat Clubs were formed with the single mission to win the annual Boat Race, an event that began out of friendly rivalry and has grown to become an iconic British sporting event, attracting global interest.

It is estimated that for every stroke taken in The Boat Race, the crews will have rowed 600 in practice.

The Thames Barrier is the Largest Moveable Flood Barrier in the World.

Construction began in 1974 and the barrier was officially opened by the Queen on the 8th May 1984.

By holding back the tide, the barrier creates more space in the river for excess water from upstream to flow down. At low tide, the Thames Barrier is then opened and the floodwaters flow to the sea.

In the summer of 1858, during what is now lovingly referred to as ‘the big stink’ Parliament was suspended due to smell of the Thames’ polluted waters.

As The Times reported it, “The intense heat had driven our legislators from those portions of their buildings which overlook the river. A few members, indeed, bent upon investigating the matter to its very depth, ventured into the library, but they were instantaneously driven to retreat, each man with a handkerchief to his nose.”

You can walk 184 miles of the River Thames along the Thames Path from its source in the Cotswolds through several rural counties and on into the heart of London. The Greater London section of the route is a mere 79.5 miles from Hampton Court to River Darent.

Islands in The Thames

There are over 130 islands in the Thames with over 40 of them inhabited.

To mark 90 years since the death of Jerome K Jerome, author of Three Men in a Boat, The Telegraph unearthed 21 of the most fascinating islands and eyots on the Thames.

Wildlife in The Thames

The Greater Thames estuary is London's biggest wilderness and home to a fantastic and diverse array of species.

Although considered biologically dead in the 1950s, through much hard work from conservation organisations, companies and the government, sewerage systems have been rebuilt and developed and the Thames is now teaming with life.

The Tidal Thames is home to a number of recognisable and charismatic marine mammals, including harbour seals, grey seals, harbour porpoises and the occasional bottlenose dolphins.

There is an incredible 125 species of fish that have been found living in the Thames, and this includes species of conservation and commercial importance. Species include seabass, Dover sole and flounder and the cucumber smelling smelt.

Art and The Thames

The Thames has provided inspiration for countless artists over the year from Claude Money and Camille Pissarro to JMW Turner and Gilbert and George.

Monet The Thames at Westminster 1871

Pages along this river