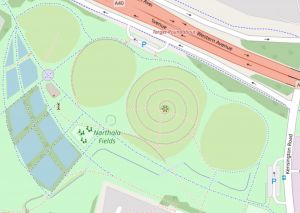 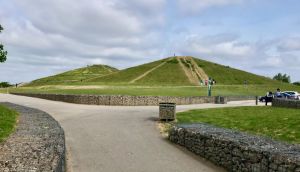 Northala Hills, showing two of the four hills. The viewpoint is on the top of the left side hill.

Northala fields is green land surrounding four prominent artificial hills, created in 2008 in part from the rubble produced by the demolition of the old Wembley Stadium. The highest of these hills is accessed by a spiral footpath to a viewpoint taking in west and north london and from which the new Wembley Stadium can be seen on a reasonably clear day. The Olympic flame was carried down from the top of the main hill by Boris Becker on its way to the opening ceremony during the 2012 Olympics.

There are two car parks available (one of which can be seen in the photo on the right) and a cafe open most days. If viewpoints are not your thing, why not consider some fishing in the adjacent ponds (with suitable license of course).