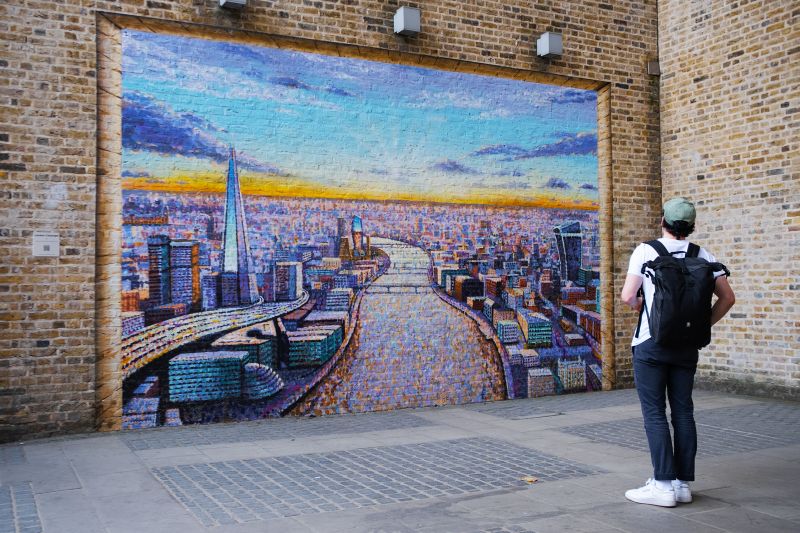 Painted by James Cochran aka Jimmy C. Located on the south side of Blackfriars Station close to Tate Modern. The mural can be easily found whilst walking along the Western Loop of Jubilee Walkway.

Completed in Oct 2020 as part of a series of London cityscapes that began during the November 2019 election with Brexit was very much in the National consciousness. Cochran’s first painting in the series was  posted with the description - The dawning of a new age or an apocalyptic vision?

The events of the months that followed meant these views of London did indeed become a deserted post apocalyptic landscape.

“In the confines of my London studio I chose to focus on two main compositional view points for the following paintings, either looking down the river Thames towards Southbank or looking up back up the river towards Tower Bridge. Within these compositions I set to exploring new techniques and approaches with the paint itself as well as exploring new concepts.”[1]

When it came to planning the Blackfriars painting Cochran had the idea of creating a window or trompe l’oeil effect in the wall. The desire was to preserve the heritage of the brick but also to allow the mural to fit harmoniously into the space. The viewpoint Cochran has painted is relevant to the position of the wall along the Thames path.

He said: “For me this is perhaps the ultimate wall I’ve painted in the 10 years I’ve been in London. It’s not just a significant location but this is my way of paying tribute to the city I love. I knew I wanted to paint a city scape, inspired by a painting I saw of London in the 1940s by an artist called David Bomberg.

“I wanted to capture the energy and movement of London as well as making sure the architectural icons are there – those buildings we see as we navigate the city and we all recognise. I even used satellite imagery to get the buildings in the right places – I know what Londoners are like and they recognise the streets and the places they work. I hope by the way I’ve created the rhythms and movements, I’ve evoked the way people navigate the city and relate to it.”[2]

Retrieved from "https://londonnationalparkcity.wiki/index.php?title=London_Cityscape_Mural&oldid=2489"
Category:
This page was last edited on 3 May 2021, at 10:23.
Privacy policy
About London National Park City Wiki
Disclaimers