The Hogsmill river is named after the mill owned by John Hog. Until 1768 it was named ‘the River of Ewell’ or sometimes the Lurteborne, which means dirty or urban river.

The 7 mile river has its source in Ewell village, where it is fed by several springs that fill the ornamental pond at Bourne Hall, it ends when it flows into the Thames at Kingston. The Hogsmill River has played a very long and important role in the history of Ewell both as a source of power for several mills, including the gun powder mill complexes, and as an inspiring landscape for famous artists.

It was along the banks of the Hogsmill that the 19th century pre-Raphaelite painter John Everett Milais painted his famous "Ophelia".

The Hogsmill River is a noted feature of section 8 of The London orbital walk. 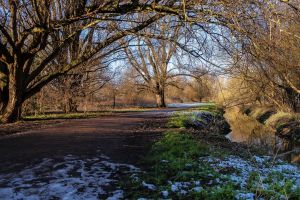