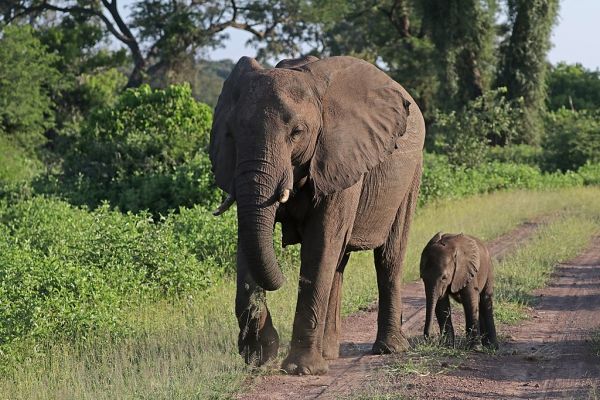 Elephants are the largest existing land mammal and are usually found in Africa and Asia. Elephants live in matriarchal groups consisting of females and children with males living in isolation. Elephants require an extensive area of land to fulfil their food and water needs (elephants feed up to 18 hours a day), which is why human expansions has significantly decreased elephant populations. Elephants, often deemed as large, wise, and peaceful creatures, have a long history in London and still impact the City and National Park of London today.

Ancestors of elephants and close relatives, such as the wooly mammoth, lived in London, as well as other parts of Europe thousands of years ago during the Ice Age and possibly the stone Age. The first known elephant in London was brought over by Emperor Claudius during the Roman invasion of Britain in AD 43. Link

The first elephant to be brought to London since then, was an African elephant given to Henry III in 1255 by King Louis IX of France. Since then, more elephants have been brought to London as gifts to monarchs. Like many other exotic animals at that time, elephants lived in the menagerie of the Tower of London until 1831 when they were transferred to the London Zoo. Link 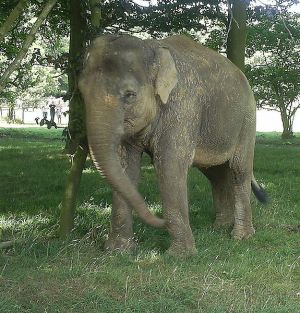 Mya 2006 after being transferred to the Whipsnade Zoo. Link

Currently there are no elephants in London, as the last elephants Azizah, Geeta, and Mya were moved from the London Zoo to the Whipsnade Zoo, which is the UK’s largest zoo. Elephants that live in captivity have shortened lifespans, are more susceptible to illness, and live in isolation most of their lives. These reasons are why there are currently no elephants in London and there most likely won’t be any in the near future due to  the efforts of the Elephant-Free UK campaign. Link

In 2010, 250 elephant statues were designed by various artists and were put up for a celebrity auction to secure areas for Asian Elephant habitation in Kerala India. Asian elephants are endangered species and have lost 95% of their habitat in the last 100 years due to human expansion. This parade was London’s biggest outdoor art event ever and raised over 4 million GBP which secured vital areas in India.

Another parade with 30 elephant statues decorated by Indian artists also took place in 2018 to raise awareness and support for the elephant. Link 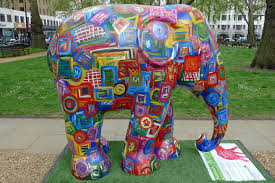 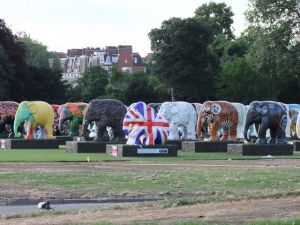 The Elephants of Tomorrow

Passing by Marble Arch, you may have seen a herd of 21 bronze elephants. These 20 baby elephants with one mother elephants are a sculpture installation to raise awareness of the Sheldrick Wildlife Trust. The life size sculptures are depictions of real orphan elephants that the Sheldrick Trust has rescued, such as Enkesha, who almost lost her trunk in a poacher’s snare.

This elephant sculpture by Kendra Haste is currently installed at the Jubilee line entrance of Waterloo. It is part of an installation called Underground Safari. The Waterloo Elephant also pays homage to the elephants that once performed in the circus in the 18th and 19th century in Astley’s Amphitheatre, which Waterloo station stands next to.