Appearance of Parakeets in London

There have been several myths about how a tropical bird such as the ring-necked parakeet became native to an environment with such a drastically different climate to its origin. There are theories that go as far as to suggest that their arrival in the UK was promoted by the legendary guitarist Jimi Hendrix, when he released a pair on Carnaby Street in central London, in the 1960s.[1]

While it is an extremely intriguing theory, it seems unlikely that this was the source of their arrival. Several scientists from Queen Mary, University of London, UCL, and Goldsmiths, University of London, through thorough analysis have come to the conclusion that their establishment in UK wildlife came in 1931 and 1952 when fears regarding the fatal ‘parrot fever’ outbreaks were linked to the parakeets, resulting in several releases of the popular parakeet pets.[1]

Their unmistakable vibrant green and blue feathers that fly past or perch in park trees have become a reminder of the wonders of London City Park. [2] Protected even under the Wildlife and Countryside Act 1981, they are proudly regarded and protected as native inhabitants of the UK.[3]

If you are lucky enough one day you may find yourself surrounded by hundreds of chattering and singing parakeets hidden by the bright green leaves of Hyde Park’s flourishing trees. Their presence has become yet another keystone of London’s history and charm. The Ring-necked Parakeets are yet another beautifully unique piece of the puzzle that makes up London National Park City and makes it just that much more special. 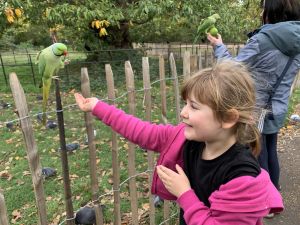