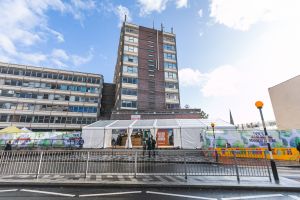 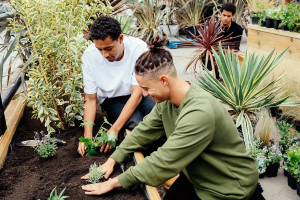 Loyle Carner and a member of the community planting as part of the Ambassador House urban greening project, August 2020 (Photo c/o Timberland) 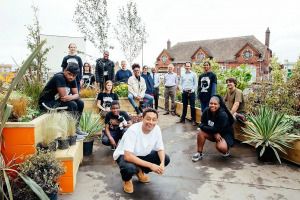 Ambassador House in Thornton Heath (London Borough of Croydon) is a nine storey office block with retail units at ground level, directly opposite the main entrance to Thornton Heath Train Station. The building has several freeholders (including Network Rail) and leaseholders meaning that re-development of the site has been challenging, however the forecourt area is owned and managed by Croydon Borough Council and was the location for an exciting (meanwhile) urban greening collaboration in 2019 - 2020.

The South London music artist Loyle Carner, working with the global apparel brand Timberland (as part of their Nature Needs Heroes campaign), Croydon Borough Council, National Park City Foundation, Kinc Agency, Urban Growth and members of the local community took over the site in October 2019 and staged a party inviting members of the local community and press from across the London to get involved and support this urban greening initiative - including through design, installation and planting. The programme was heavily disrupted by the Covid-19 pandemic but in August 2020, over a few days the forecourt was transformed with the addition of planters, planting, store cupboards and art work, attracting lots of interest from the local community.

Now the challenge is to maintain the site and to create a positive legacy, so that it becomes easier to replicate meanwhile projects like this one all over the London National Park City. The project had a budget of close to £100,000 and was featured in an MTV production called Concrete Green as well as in a project video sponsored by Timberland. The project received some positive media coverage, particularly in the fashion press given the sponsorship from Timberland.