10 Things to Enjoy in Perivale Park

(More than) Ten Things to enjoy in Perivale Park 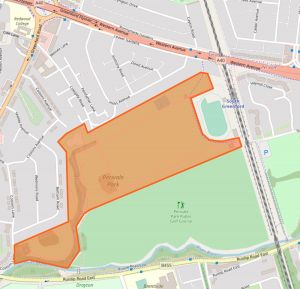 Four ponds; the one on the right is not settled yet.

In the north-west corner of the park, three small connected ponds were created in September 2019 by damming and diverting a small stream which runs down from the A40. In May 2020, the aquatic life of the ponds was improved by adding some plant mats, to help remove algae and aid water purification. A fourth pond was added in December 2020. The ponds now regularly all fill from the often abundant winter flow of the stream and then overflow into the nearby Coston's brook, but now running with water from which some at least of the oil and other pollutants washed down from the dirty surface of the A40 has been removed. As a result, Coston's brook and then the River Brent, for which it is a tributary, are also cleaner and more welcoming to wildlife.

In the mornings, a family of ducks is regularly seen enjoying the ponds and in the summer you can also enjoy the adjacent meadow which is often planted with meadow flowers, including such colourful ones as Cosmos. In the winter the ponds can freeze over, producing much seasonal variation to enjoy.

A local debate is currently how to name these ponds! In total around the park there are around 10 ponds that will need naming! 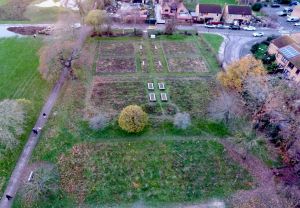 A bird's eye view of the orchard garden

For many years, Perivale Park had a bowling green, located near Cowgate road. About 15 years ago it fell into neglect when the bowling group moved to another green. Blessed with its own water tap for easy watering, the square plot of ground was converted into an designed orchard garden with the help of a government "pocket parks" grant. It consists of four wild flower meadows arranged in a square, down the centre of which is an avenue of ten crab apple trees (Malus Red Sentinel). These produce dense white spring blossom and radiant red autumn fruits. The four meadows were planted in late 2019 with a seasonal mixture of narcissus, eremurus (foxtail lily) , allium and gladioli with flowering blue flax and other wild flowers filling the gaps. Four recycled wooden benches occupy the central parade and are surrounded by a flower bed planted with attractive grasses, long flowering geraniums and other perennials. Next to this area is an orchard planted with native variety fruits, including cherries, plums, pears, cob nuts and apples, within which are four raised beds for community vegetables. The orchard garden is in constant need of gardeners (hint!) and summer watering from that tap that used to water the meadows and trees. 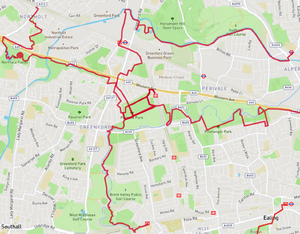 Perivale park is a good starting point for walks radiating out in all four compass directions and lasting between 60-90 minutes. Each starts at a station (South Greenford) and ends at a different station, so they are not circular. You can see much of the history of West London when you take these walks. The highlights include Brent river park, with its zoo and church, the Grand Union canal and historic chemical dye factory site, Northolt manor and its ancient moat and Pittshanger and Brentham garden suburb with an ancient 12th century church. 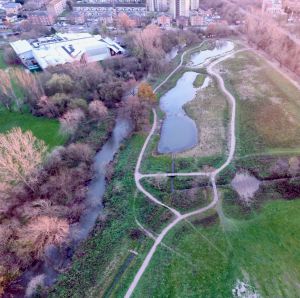 These wetlands were created in 2019 by excavations from an old cricket pitch, long reverted to a grassland meadow and very prone to flooding during high rainfall. The ponds (three during low water, which can merge into two or even one during high rainfall) are fed by a small stream that rises in the nearby Stockdove estate. The stream is dry during the summer but the end pond has been lined and so holds water all year. A variety of geese, ducks and gulls are seen on the ponds throughout most of the year.

The River Brent can be seen on the left, into which the ponds overflow during period of high rainfall and especially when the Brent is running high because of release of water from the upriver Brent reservoir. The area is also known to be a Bat corridor and the northern part of the meadow has been surveyed several times to establish an usually high bio-diversity. 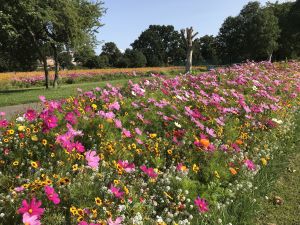 Flowers along the capital ring path in 2017

The track, installed around 1980, is run by Everyone active, who also manage the adjacent golf course. The track was used as a training base for the 2012 Olympics in London, and has many excellent facilities, including an indoor gym with a host of training machines, weight lifting etc. The central outdoor arena has shot-putting facilities and the track itself has been recently resurfaced. Before lockdowns in 2020-21, it was used for instructor-based exercise by the Perivale Park "RedGreen" group (which means mostly Retired, Extremely Dangerous exercisers) as well as many schools sports days and athletics clubs. It has a small adjacent car park for about 25 cars which is shared with the golf course and is floodlit during the winter. 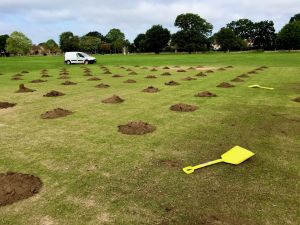 Cricket pitches, at the end of the season being prepared for the next one.

There are two full size cricket pitches as part of the sports facilities in the park. Booking for these is managed by Playfinder. The pitches are actively managed by Ealing parks and are always re-sown during the winter for the next season. 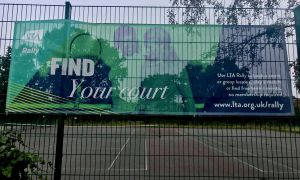 The Perivale Park Tennis courts are operated by the Lawn Tennis association. Access has recently been made by keypad entry and slots are normally booked online when lockdowns are not operating. There are two courts available, along with an adjacent general area which has basketball markings. There is no floodlighting. 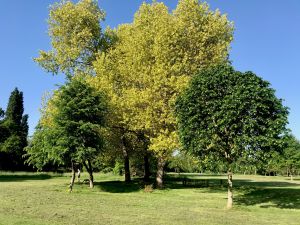 This nine-hole Golf course is bounded by a railway embankment, the course of the River Brent and the park itself. Within it are contained many mature and spectacular trees, normally only enjoyed by the golfers, but during lockdown by many walkers as well! There is an excellent cafe which is also open to non-golfers and toilet facilities are available. The course is operated by Everyone Active 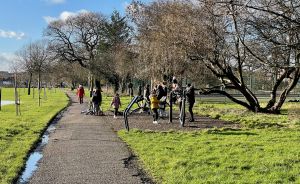 This is a recent addition to the park, with installation starting in March 2020, immediately followed by Lockdown. The units themselves were installed in December 2020 and (lockdowns permitting) should be available for use in 2021. There are six machines in this outdoor gym, which is located alongside the Capital Ring path, next to the Tennis courts. 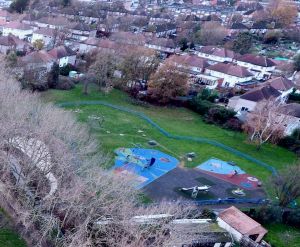 The playground has access both from the park and from the adjacent Cowgate road. In December 2020, part of the grassy area next to the playground was converted into a shallow pond (just visible to the left of the photo) and the hedgerow removed to open up the vista of the park. 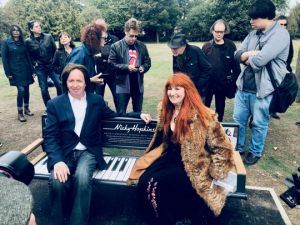 Nicky Hopkins was born in Perivale, Middlesex in 1944, and became one of the most widely respected session musicians from the 1960s to the 1990s. He played on many of the most influential albums of that era, including those made by artists such as the Rolling Stones, the Beatles, David Bowie and Ella Fitzgerald. The memorial, in the form of a keyboard bench, is located along the path of the Capital ring in Perivale Park. Photos of the ceremonial unveiling in September 2018 an be seen here.

Perivale park is on section 9 (Greenford to South Kenton) of the route of the Capital Ring,[1] a circular walk around London. The ring joins from the Costons Lane entrance in the south west and heads through the park and out towards the pedestrian bridge across the A40. Just before the exit there, it passes through a shady spring bulb glade which is periodically planted with more bulbs.

A nature reserve on the edge of the park is gradually taking shape by taking over the site of old allotments, which were abandoned because of propensity for flooding.

Sunrise and Sunset in the Park 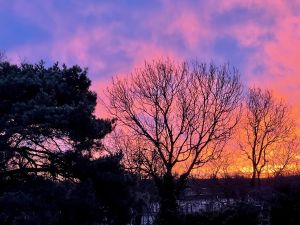 Being in West London, and if one is up early in the park (and a good few joggers and dog walkers often are) one can catch some spectacular effects from the sun, helped possibly by the atmospherics of central London.

Fungi in the Park 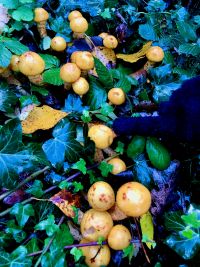 Fungi in the park, often found growing in the remains of wood mulch left over from a mass tree planting.

In December 2018, there was a Trees for Cities planting, which involved around 150+ volunteers, around 5000 trees and a great deal of wood mulch to surround each planting. They over-ordered on the mulch (and the volunteers under-spread it), with the result that a number of large mounds of the stuff were left at the end. Over the next two years or so, these formed the basis for some colourful and diverse outbreaks of fungi. In the autumn, it is not difficult to track them down, although please do not try to eat any unless you are in the presence of a true expert! 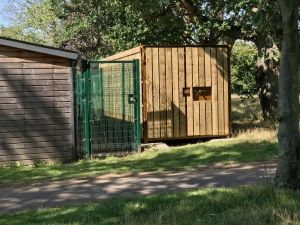 Storage container for the equipment used by the  Greenwayers.

The River Brent flows on the southern edge of the park, part of which is also the local golf course. By the time it reaches the park, it has flowed about 8km from the Welsh Harp Reservoir and has acquired a lot of detritus along the way. This is sadly much augmented by local litter deposited along its banks, in the river itself as trapped by fallen tree branches and in the park. The Greenwayers are a group of volunteers who help to clean this stuff out, in collaboration with Thames21, using specialised equipment to ensure that safety is paramount. A new home base was installed in the park in September 2020 and when those lockdowns are over, the cleaning activities are expected to resume in full force. They will be joined by regular visitors to the park and its environs, the Ealing-based LAGER CAN group, who also help scour the footpaths and meadows of the park to remove those cans and much else.

This long walk in West London along much of the River Brent valley there passes through a number of parks and green areas, including Perivale Park where it follows the Capital ring segment. It starts at Hanger Lane station and then goes through Brentham Meadow before passing on to Pitshanger Park following the Brent round its course there. From there it makes it way to the greater Perivale Park area where it joins the Capital Ring. On exiting the park, the walk again follows the route of the Brent and ends appropriately in Brentford itself and the River Thames.