10 Things to Enjoy in Abbey Wood and Plumstead

In the built-up area near Abbey Wood station and bounded by roads including the B213 McLeod Road, Greening Street Green was registered as a village green but still had to be saved by the community from being developed in 2018 so that it could remain as a rare green and open play space.

Along McLeod Road from Greening Street Green, Bostall Gardens is a former bowling green with a children's playground, basketball court and tennis courts, outdoor gym, and children's playground. Volunteers have converted the former nursery area into Bostall Community Garden including for food growing.

Parallel with the railway line between Plumstead and Abbey Wood, the former ornamental gardens of Plumstead Gardens has declined in quality but a new Friends community group is caring for the space and looking to improve conditions and use of the space.

Sloping away from Plumstead High Street, St Nicholas’s Gardens was laid out as ornamental garden on part of the former churchyard south of the nearby parish church. Some gravestones remain among the grassed, wooded square space.

Bostall is a Sussex for a steep path, particularly over the Downs, and means a woody heath. Bostall Heath and Woods is an area of 159 hectares of woodland with areas of heathland, adjacent to Lesnes Abbey Woods (see below). Bostall Woods which is south of the A206 (Bostall Hill) with Bostall Heath north consists of gorse and broom at the top of the Hill, with dense woods and deep ravines on either side. The Heath faced being developed for housing in the 19th century but the Metropolitan Board of Works and the London County Council bought up sections and combined them in the site seen today. 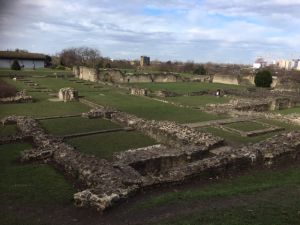 The remains of a once large monastery 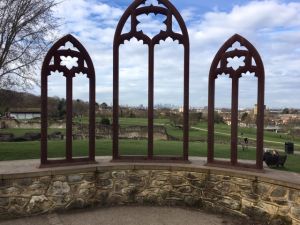 Artwork representing the abbey windows looking towards Canary Wharf in the back ground.

Sited on sloping ground overlooking Thamesmead and with view views back to the Thames Barrier, the ruins of Lesnes Abbey, founded in 1178, are a Scheduled Ancient Monument and Grade II listed. Lesnes Abbey Woods and Park are a Site of Metropolitan Importance for Nature Conservation. A study has found 906 species of invertebrate, 46 birds, 59 species of fungi, 292 species of plants and 12 species of mammal. Expect to see wild bluebells and native daffodils in spring. The site is also rich in geological interest with fossilised sharks’ teeth and shell beds. A fenced-off Mulberry Tree is thought to be one of the original trees mistakenly ordered by James I to be grown for silk production. 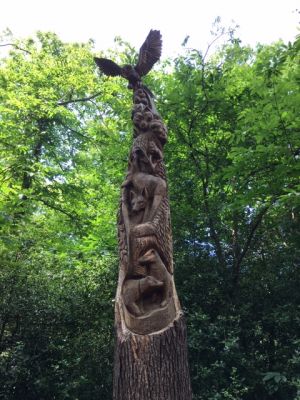 A huge carved tree representing the animals of the forest.

Follow section two of the Green Chain Walk through Lesnes Abbey Wood and Park to Bostall Woods and Heath. Be aware of the art work in Abbey Woods both large and very tiny. Continue on section three to reach East Wickham Open Space and on toward the Shooters Hill cluster including Oxleas Wood.

Between the ancient woodlands of Bostall and Oxleas, East Wickham Open Space is an open grassland corridor where wildlife surveys have recorded 34 bird species, 17 butterfly species and 115 flowering plant species.

Named after a former Mayor of Woolwich who was behind the creation of the Well Hall Pleasaunce at Eltham, The William Barefoot Garden is a sloping site with a grassed garden area at the foot of the hill from which a path winds up the hill through woodlands and planting to a gate at the top of the hill to Woolwich Cemetery.