10 Things To Enjoy in Crystal Palace 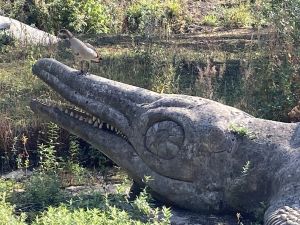 A bird meets one of Crystal Palace Park's dinosaurs 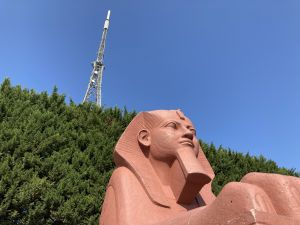 Take a walk in the park... Jurassic Park.

Created in 1854 as the permanent home of the glass house from the Great Exhibition of 1851, Crystal Palace Park is also home to a herd of dinosaurs. Nearby is a series of geological illustrations built by Joseph Paxton and David Thomas Anstead to demonstrate how layers of rock are laid down over time. From the dinosaurs, head up the hill to find more historic features, including the remains of the Crystal Palace, as well as a sphinx and London's very own Eiffel Tower.

Running alongside Betts Park is the former Croydon Canal. Opened in 1809, it was designed to link Anerley, Forest Hill and Penge to the Thames. It failed to make money and was quickly superseded by the train, which now runs along the straighter parts of its route.

Opposite his beloved Selhurst Park, home of Crystal Palace Football Club, local artist Mr Cenz has worked on this piece to brighten up this part of South London. The Selhurst Park Mural becomes animated with the free Mr Cenz AR app which is available for download via the Apple store.

Crystal Palace Park marks the starting point for Section 11 of The Green Chain Walk. This 5.4 mile walk will take you to Nunhead Cemetery via the One Tree Hill Viewpoint and The Horniman Museum and Gardens.